Home Stuff To Do The Falkirk Wheel 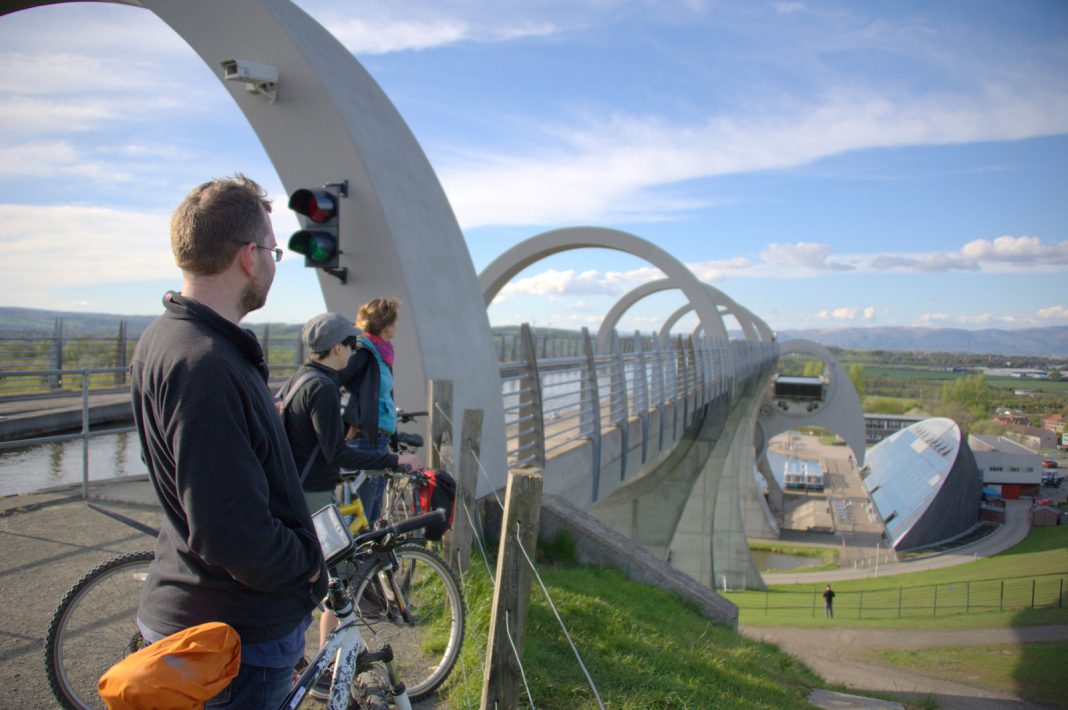 For all you nerds out there, a day trip to Falkirk to see the Falkirk Wheel is likely to have you dribbling with geeky glee as you explore the engineering marvel up close. But fear not all you partners, friends or kids of nerds, if the nitty gritty of engineering makes you snore, you’ll still think The Falkirk Wheel is pretty cool. After all, it’s basically an enormous Ferris Wheel for boats.

The Falkirk Wheel is, funnily enough, located just outside the town of Falkirk, at the point where the Union Canal meets the Forth and Clyde Canal. These days the canals are used mostly for pleasure cruising, but in the 19th century they played an integral part in the growth of Edinburgh. The two canals  provided a direct link to Glasgow and were used for transporting all the coal, bricks, sand and stone needed to build the ever growing Edinburgh during the Industrial Revolution. You can read my super exciting post about the Union Canal during that time later, but for now just know that the onset of speedy, cheaper railways meant that by the 1930’s the canals’ glory days were over and they were closed off and virtually abandoned.

Previously, the canals were connected by a series of locks, but when the British Waterways Millenium Link Project was devised, they decided that instead of simply building new locks, they’d go a bit more flash, a bit more sci-fi and a whole lot more ‘Wow’.

The wheel has an overall diameter of 35 metres (115 ft) and consists of two opposing arms extending 15 metres beyond the central axle and taking the shape of a Celtic-inspired double headed axe. Two sets of these axe-shaped arms are connected to a 3.8-metre (12 ft) diameter central axle of length 28 metres (92 ft). Two diametrically opposed water-filled caissons, each with a capacity of 250,000 litres are fitted between the ends of the arm.

The caissons, or gondolas, always carry a combined weight of 500 tonnes of water and boats, with the gondolas themselves each weighing 50 tonnes. Care is taken to maintain the water levels on each side, thus balancing the weight on each arm. According to Archimedes’ Principle, floating objects displace their own weight in water, so when the boat enters, the amount of water leaving weighs exactly the same as the boat. This is achieved by maintaining the water levels on each side to within ±37 millimetres (1.5 in) using a site-wide computer control system comprising water level sensors, automated sluices and pumps. It takes just 22.5 kilowatts to power ten hydraulic motors, which consume just 1.5 kilowatt-hours per half-turn, roughly the same as boiling eight kettles of water. 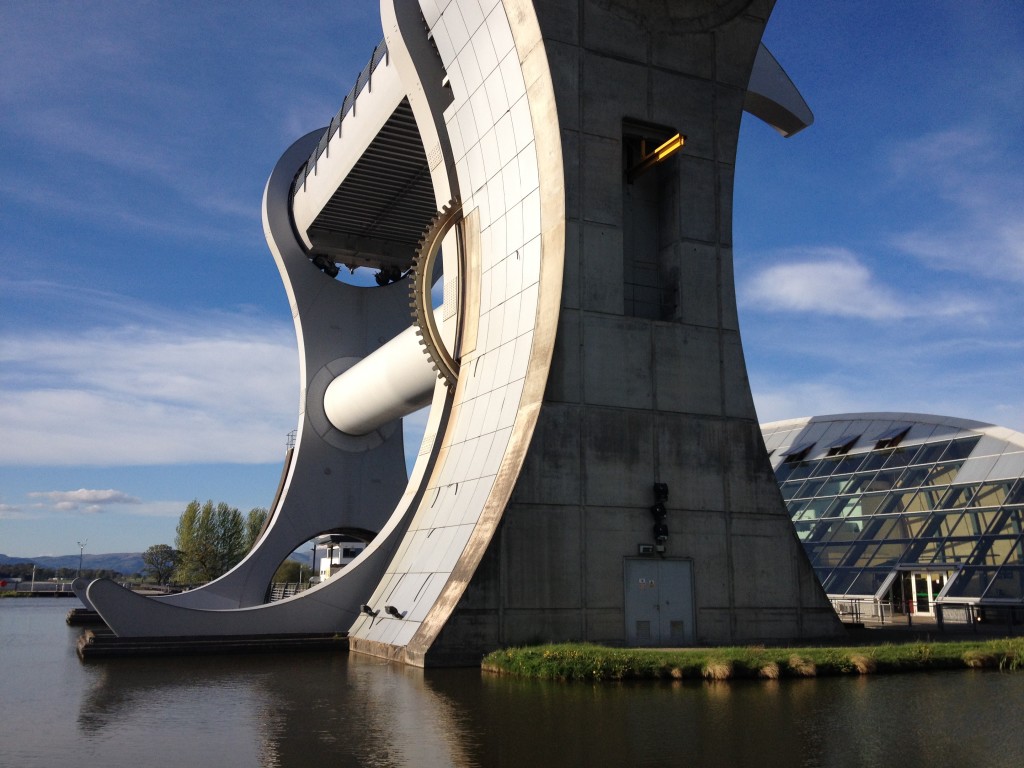 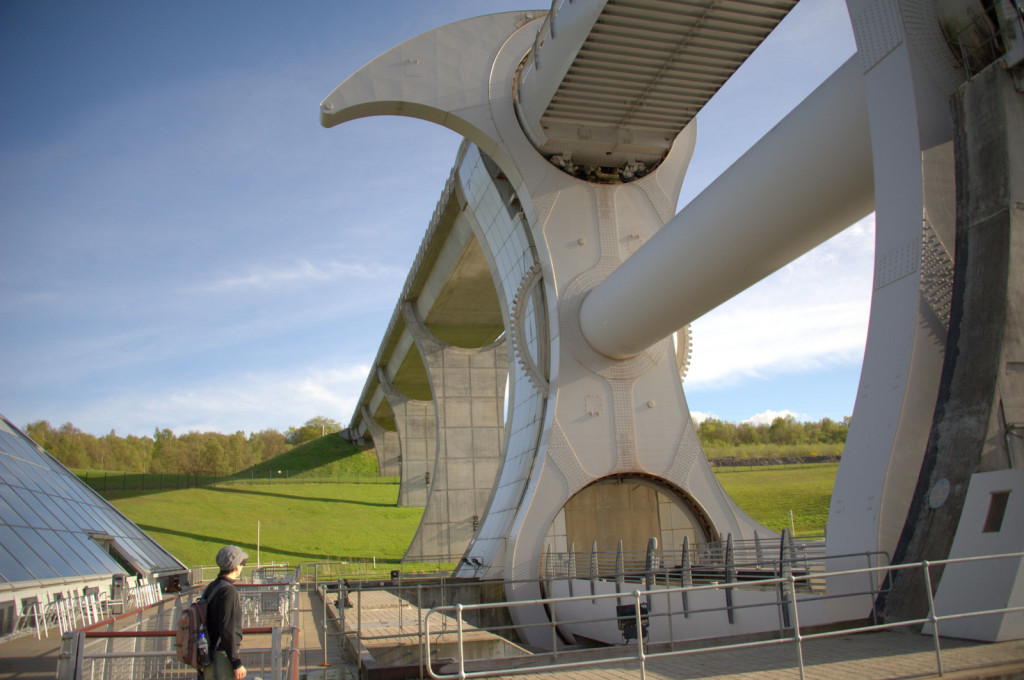 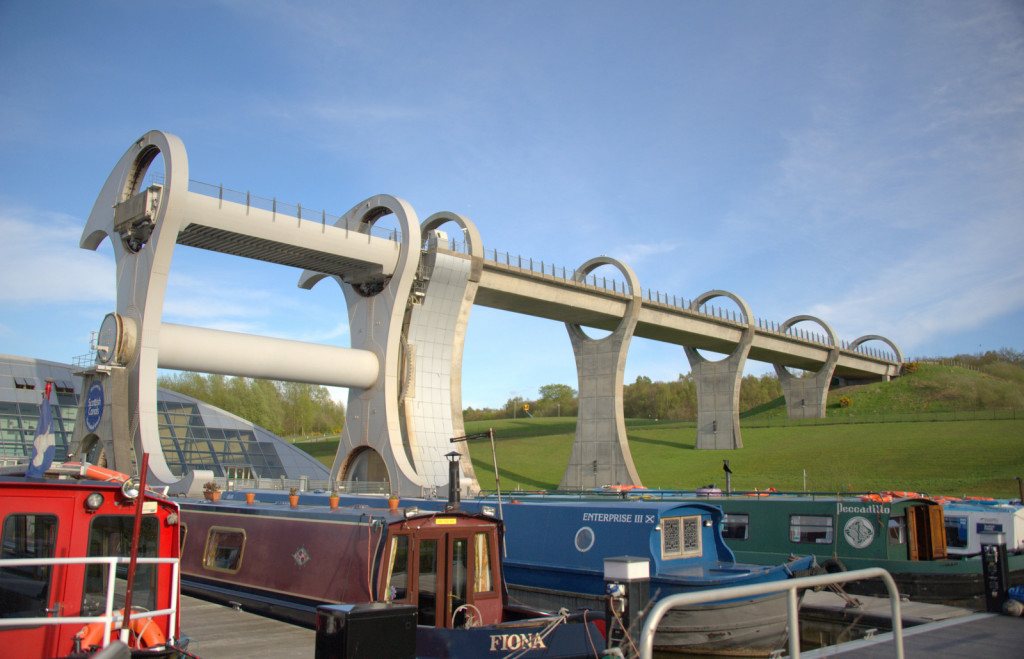 Interesting Facts For us Non-Science Types

Cost of the Falkirk Wheel ‘interchange’ was £17.5 million
1200 tonnes of steel was used to make the wheel.
The Falkirk Wheel is the only rotating boat lift in the world.
Boats are raised 24 metres but also need to go through 2 locks (totaling a further height of 11 metres) to reach the Union canal from the top of the wheel.
Since 2007 The Falkirk Wheel has been on the back of Scottish £50 notes.
Construction began in 1998. The Queen officiated at the opening ceremony on May 24th 2002. The opening was put back a month after a bunch of numnuts broke in and caused flooding and £350,000 worth of damage.

Falkirk is roughly 23 miles or 37.5 km’s north-west of Edinburgh. You can drive there, catch the train or, my particular favourite, cycle along the Union Canal (this mode of transport makes the trip roughly 30miles/50km’s though).

Whilst the wheel is certainly interesting, I wouldn’t make it the only stop for a day trip. You’ll probably have seen all there is to see in an hour or so, depending on whether you fork out and wait around for a ride up and down in one of the tourist boats. My advice is, since you’re already in Falkirk, you should definitely also check out The Kelpies. On the way there, or back, you could also stop off in the cute little town Linlithgow, which like Edinburgh, has a castle too.  OK, it’s actually just a palace, but close enough.