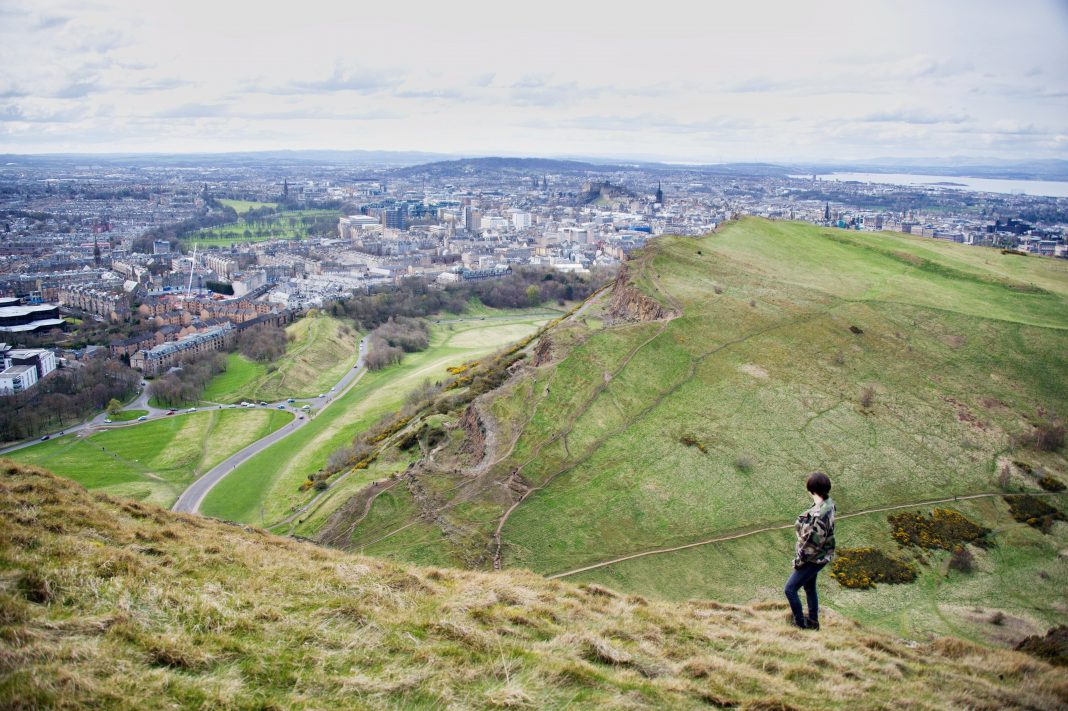 Take a walk around Edinburgh’s Old Town, and you may notice the big old mountain looming just at the edge of the city. This is Arthur’s Seat, which some like to think was named as such because it is the locations of King Arthur’s legendary Camelot. Nobody really knows how it got its name, but for me what’s even cooler, and actually true, is that Arthur’s Seat is an extinct volcano. And huffing and puffing your way to the summit is easily one of the best things to do on a visit to Edinburgh.

Arthur’s Seat is in Holyrood Park, a 640 hectare expanse of green space that’s just a smidge to the south east of the city centre. Those of us who haven’t seen the inside of a gym since high school can trudge up to the 250m summit in around 45 minutes, so it’s very doable. Apart from giving you enough of a workout to make all those Haggis Bon Bons you’ll be eating later guilt free, the top of Arthur’s Seat has beautiful 360 degree views of Edinburgh. Once you’ve caught your breath from the climb it’ll be taken away again by the scenery.

You don’t have to wait or perfect weather either. Dramatic clouds and a bit of gale force wind action actually makes you feel like you went all the way up to the Highlands.

(Joking. Be careful in bad weather. Windy is OK, but wet is not very safe. Or enjoyable.)

It may not look it, but the photo above is right at the bottom, on the eastern side near Holyrood Palace. The number of people here should give you an indication of how popular Arthur’s Seat is, which is good news for those of you who are lone travelers and wary of your safety, as you’re probably not going to have an accident and be left injured down a ditch… for long.

Salisbury Crags lets you be a bit of a daredevil by hanging off the side like this if you so choose.

You may not see any real live lava spewing out and no, you can’t abseil into its cavity, but spend a couple of hours exploring Arthur’s Seat and you can still brag you climbed a volcano. Plus you’ll get a great workout and equally fab views at the top. Much cheaper than a ticket to Iceland, yes?

There’s quite a few different paths to take to reach the top, the most popular being straight up the stone steps just past Salisbury Crags on the west side. But I think going round the back way to any of the eastern paths that start between the back of Holyrood Palace and just before you reach St Margaret’s Loch are much more enjoyable. They are less crowded and the footing is better, as the stone path on the other side has worn smooth from all the traffic and gets pretty slippery.

Keep in mind there’s also a little bit of scrambling to reach the very top -that means there’s no path and you have to climb over some rocks. It’s not too hard, but just go slowly and find yourself an easier route if you don’t think you can manage the route people in front of you are taking. There are many alternatives for the last rocky scramble.

There are four hill forts in Holyrood Park for you to explore, all about 2000 years old, like that one below.

All that exercise made you hungry? Well, wander round the back of Holyrood Park and get yourself down to Duddingston for the Sheep Heid Inn, Edinburgh’s oldest gastro-pub. Or, and this would be my preference, head back to Old Town for a scoop of ice cream or Ice Cream Cookie Sandwich from Moo Pie Gelato.