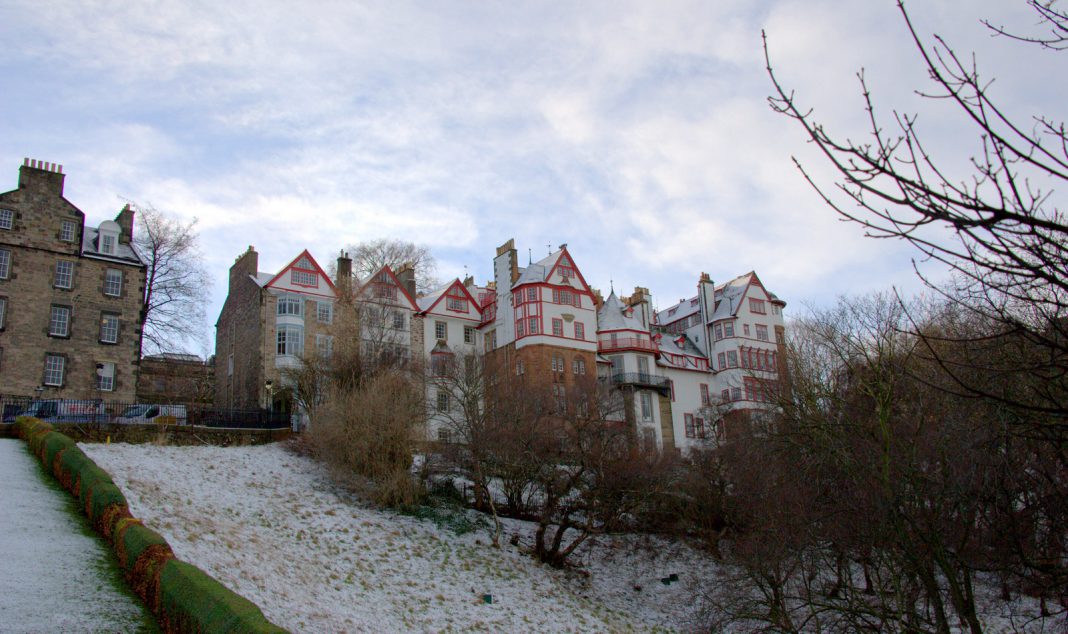 Look up Patrick Geddes and you’ll no doubt see a distinguished list of accreditations; town planner, biologist, sociologist, philanthropist, conservationist, ecologist, zoologist. That’s a lot of ‘ists’ for one man, isn’t it?

One of his biggest achievements in Edinburgh, and the start of his phenomenal regeneration of Old Town, sticks out like a big, old whitewashed ‘I told you so’ every time you look toward the Old Town skyline: Ramsay Gardens. Or, as I always used to call it, those white buildings just next to the Castle.

Geddes was a thinker, a big ideas guy, and putting his money, and reputation, where his mouth was, by the end of the 1800’s he had single-handedly resurrected Edinburgh’s Old Town from slumdom. As far as town planning went, Geddes wasn’t a fan of the idea that if something wasn’t working you just demolish it and start again. He believed you had to observe a problem before you came up with a solution, study it for a while, perform a ‘diagnosis before treatment’. Today this kind of civil survey is common practise in architecture, but back then it was radical. Couple that with his ideas that biology and sociology are interconnected, that if animals thrive in environments which suit them best, then the same should apply to humans, and you get the basis of his Ramsay Gardens experiment.

Geddes believed that people needed light and air and green spaces to flourish in a city and he wanted to put his ideas into practise to prove his point. So in 1886, aged 32, Geddes bought a group of James Court tenement flats in Old Town, moved there with his new wife, Anna Morton, and eventually named them Ramsay Gardens. Hmmm, honeymoon in the slums, dear?

To really get an idea of how crazy this move must have seemed back then, we need to imagine for a minute what Edinburgh, and especially the Old Town, was like in 1886. Just to the north of the Royal Mile lay the splendour of New Town, all wide streets, Georgian mansions and grid-like neatness. New Town had been helping Edinburgh become a desirable city for the very wealthy since it was completed in the 1830’s. Old Town on the other hand was thoroughly neglected. Edinburgh had become a city where the divide between rich and poor was there for all to see, helped along by the literal divide between the old and new towns, physically separated by the North bridge and Princes Street Gardens.

While New Town boomed, Old Town was dirty, crowded, diseased, dark and miserable. Tainted by the exploits of the murderers Burke and Hare in the 1820’s and the Cholera epidemics of the 1830’s and 1840’s, Old Town was deserted by anyone with the means to escape. But in New Town it was a different story. Trade to keep Edinburgh’s rich draped in the finer things in life sprang to life, as did banks and insurance companies, making it an important financial centre. Edinburgh had also become a hub for medical, philosophical and literary greats. Prestigious schools were built and the wealthy sent their offspring to be educated there. Beautiful new buildings were being built and by the end of the 19th century, Edinburgh became a tourist destination dubbed the ‘Athens of the North’.

So for Geddes, a wealthy, educated and highly regarded man, to move himself and his wife into Old Town was remarkable, and probably considered downright scandalous to the more hoity toity across the bridge. Geddes’ plan was to convince his fellow Edinburgh University professors to live in Ramsay Gardens and see that he was right, that by changing the conditions of a society’s surroundings you change the behaviour of that society. Along with architects Stewart Henbest Capper and Sydney Mitchell, Geddes supervised the buildings’ reconstruction and refurbishments. By way of the baronial design (towers, turrets and an unapologetic ‘castle’ look) and more than a few tins of white and red paint, they made sure Ramsay Gardens stood out for all in New Town to see every time they peered across from their shiny new Georgian mansions.

Geddes and Anne moved into an apartment which takes up the entire 4th floor and has 360 degree views across Old Town, New Town and northward to Fife (what, you thought he’d live in a dingy basement flat?). Outside, they knocked down walls and widened tiny alleys to make courtyards, create more air and light and of course planted the garden which they named errr, Ramsay Gardens. Ramsay by the way, was a poet who built one of the complex’s original buildings, Ramsay Lodge, and later when Geddes’ professors did indeed move in, Ramsay Lodge became one of the first University Halls of Residences in the city.

After finishing Ramsay Gardens, Geddes was able to replicate his success all over Old Town. He greatly improved the life of many of the poor and working class who lived there by applying his ideas of the importance of light, air and nature in any community’s ability to thrive. Over time, the wealthy moved back, bringing their money back with them. Today, the Ramsay Gardens buildings are some of the priciest and most sought after pieces of real estate in the whole city.

Here’s a list of what else Geddes did, beside the Ramsay Gardens project:

– Worked on the original plans for Edinburgh Zoo.
– Invented the architectural term ‘conurbation’.
– Studied at the Royal School of Mines in London with Thomas Henry Huxley (anatomist, biologist and inventor of the word ‘agnostic’).
– Was a lecturer in Zoology – Edinburgh University 1880 – 1888.
– Was a Professor of Botany – University College, Dundee 1889 – 1914.
– Was a Professor of Civics and Sociology – Bombay University, India 1920 – 1923.
– Bought and expanded the Outlook Tower in 1892, what is now known as Camera Obscura, one of Edinburgh’s biggest tourist    attractions.
– Planned the city of Tel Aviv (yep, as in the one in Israel) between 1925-1929.
– Set up multiple halls of residences around Edinburgh providing housing for 200 students.
– Founded the College des Escossais in Montpellier, France – an international teaching school.
– Is widely thought to have planned Dunbars Close Gardens (his involvement here is not yet 100% proven) in Edinburgh and many more smaller ones in and around The Royal Mile.
– Was knighted in 1932, shortly before his death that same year.

It’s pretty clear Patrick Geddes was a brilliant man. As you’re walking around Old Town, peering down little closes that open into secret green spaces and courtyards, hopefully you’ll now have an inkling of just how revolutionary this 19th century greenie was.

The Ramsay Gardens apartments are privately owned and not open to the public. Some of them are available for rental, if you have a fat wallet. They are situated in a residential area just off the Royal Mile and you’re free to walk around the outside of them. Just turn down Ramsay Lane (the corner where you’ll find Camera Obscura). Unfortunately no access to the garden is permitted to non-residents.

Dunbars Close Garden is a ‘secret’ garden at the bottom of The Royal Mile. You can read more of that here.

Read here for more on the Camera Obscura/Outlook Tower.

If you take the right hand stairs down from just outside Edinburgh Castle to the Grassmarket, you might notice a familiar name on part of them.

The pictures below are of a statue in Geddes honour which was erected in 2012 in a garden behind John Knox House. If you look at the last picture, that’s the Royal Mile just in front of The Storytelling Centre, or John Knox House. To the left, between the two red sale signs, is the entrance to Trunks Close. Go down here and you’ll find the garden. 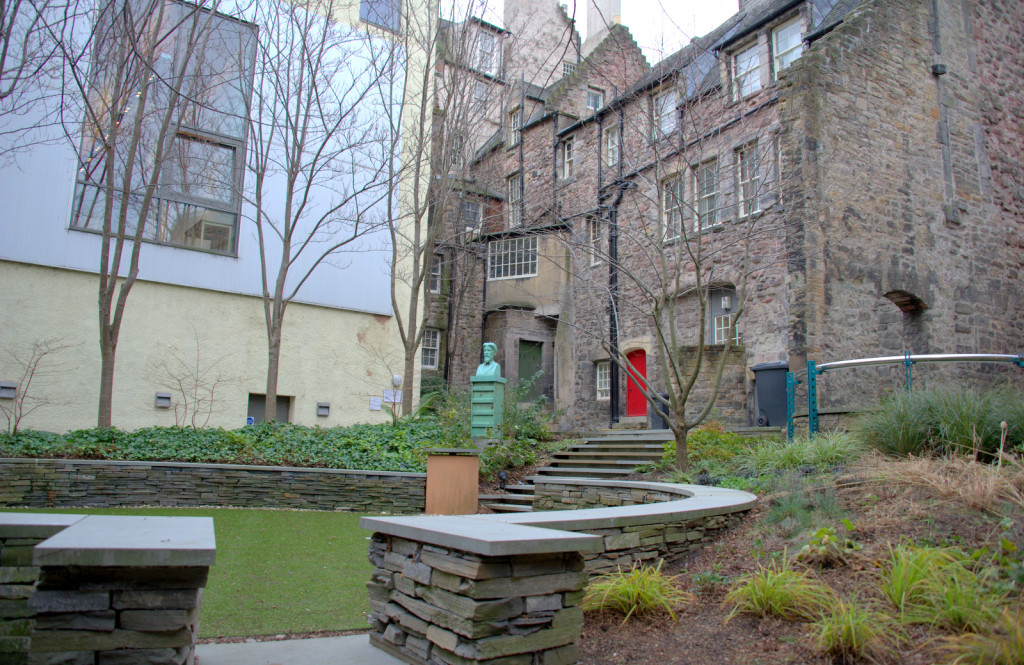 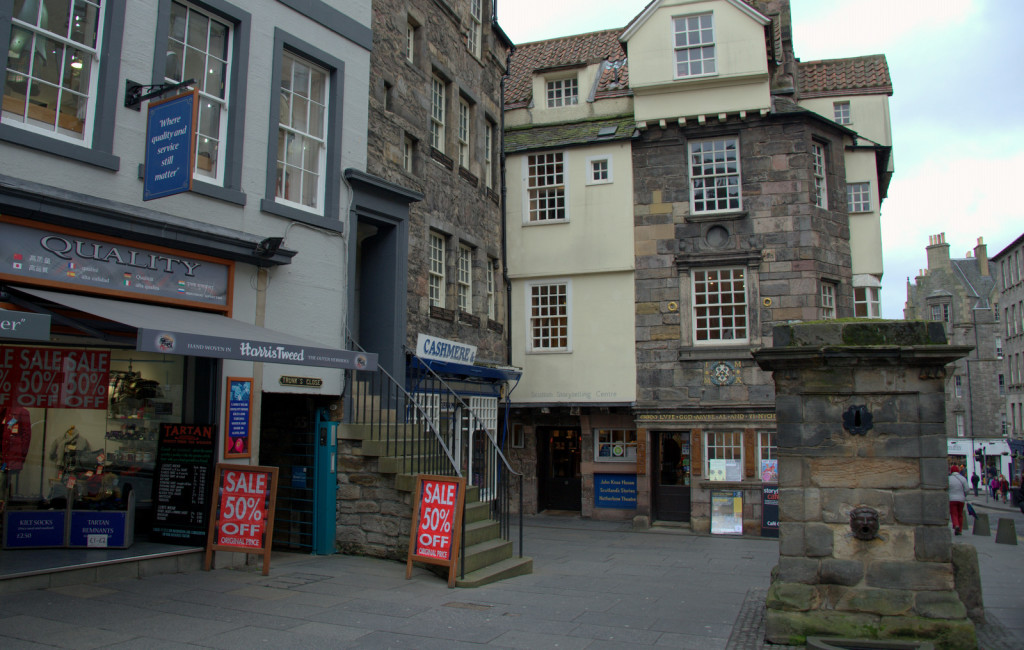 So fundamental was Geddes to Edinbugh’s past, there’s now a location dedicated to promoting all of Patrick Geddes’ ideas and initiatives. You can check it all out for yourself just off The Royal Mile in Riddles Court, and take part in events, workshops and tours that they regularly run.