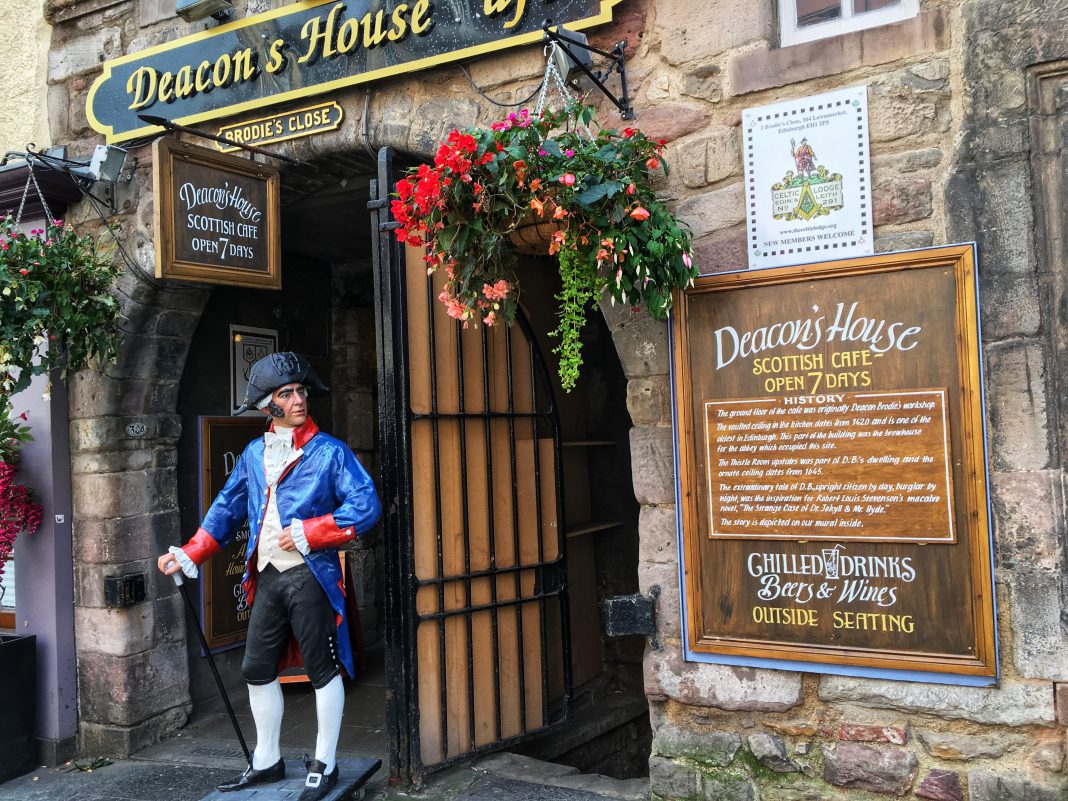 Edinburgh is a city with more than its fair share of tales of notorious criminals and nefarious goings on, but William Brodie would have to be one of the 18th century’s most fascinating. Deacon Brodie (as he was commonly called) was not only a celebrated cabinet maker, he was a trusted city councillor and a trade guild president (ie: Deacon) who mingled with the Edinburgh elite. But he also had a dark side that so captured people’s imaginations that 100 years later, he would become the inspiration for Robert Louis Stevenson’s classic Dr Jekyll and Mr Hyde.

To the outside world, Brodie was a perfectly upstanding Edinburgh citizen. He had been taught the craft of cabinet making by his father and was soon considered the best in town. So his customers were some of the Edinburgh’s wealthiest and most high profile citizens. He was also a member of the most exclusive private clubs of the time, The Edinburgh Cape Society, which put him in the company of Edinburgh literati like Robbie Burns, painter Jacob More and anthologist David Herd. But Brodie also led a very dangerous (and no doubt very busy) double life.

Brodie was a drinker and gambler and had racked up huge debts. These days most people in his position would probably just find a way to commit financial fraud from the safety of their laptops. But in those days of course, you had to get your hands dirty. So he turned to burglary. And for almost twenty years, he was very, very good at it.

Fortunately for Brodie, furniture making wasn’t his only trade skill. He was also a pretty good locksmith, and with the two roles put together, he was able to scope out the security measures in the homes of his customers, make wax copies of their keys (often for doors he himself was installing) and then simply come back, let himself in and pilfer whatever he fancied.

As far as we know, his first major crime was in 1768, when, aged 27, he used his locksmith skills to copy keys to a bank and got away with £800, which for that time was a huge sum. But for a gambler, that was never going to last long and thievery continued to be his way of getting out of trouble with the not very nice people he owed money to.

When his father died in 1782, Brodie was left a huge sum of money and some property. Coupled with a successful, legitimate day job, he should have been one of the wealthiest men in the city. But with an alter ego like his, and the added cost of by then having fathered five children to two mistresses (who didn’t know of the other), even such great wealth was not enough for him to mend his ways.

Now, such an interesting duality of character is sort of easy to understand these days, but the real mystery to me is – when did the man sleep?

Perhaps this is why, in 1786 he got himself some helpers; John Brown, George Smith, and Andrew Ainslie. With his own gang of thieves, their night time escapades became so frequent it was almost silly, and this would prove to be the beginning of the end.

Where it all Went Wrong

There is definitely no honour among thieves

Brodie was caught because he involved more people, simple as that.

In 1788, he decided to rob the Excise Office on Canongate. This was where all the city’s tax profits were held, so in other words, massive amounts of cash were up for grabs. The job was badly botched though and the gang came away with only a pittance each.  Brown, tempted by a £150 reward and amnesty from any past crimes for information on the robbery, gave himself up and promptly named Smith and Ainslie too. It’s not known why he didn’t name Brodie, but it’s possible he did so with a plan to blackmail Brodie later.

He Incriminated Himself (and again involved other people)

After Brown turned, Brodie went on the run to London, then Amsterdam, thinking he could get a ship to America and live the rest of his life a free man. Using a fake name, he befriended an Edinburgh resident called Thomas Geddes on the initial part of the trip to London. Brodie gave Geddes some letters, asking if he would deliver them once back in Edinburgh. By the time Geddes returned, a wanted ad and physical description of Brodie was all over the news. Recognising this as the man who gave him the letters, Geddes handed them into the Police. Stupidly, they contained information about the Excise Office robbery.

These letters, along with Ainslie also being convinced to turn King’s Evidence, led to a search of Brodies house, where enough evidence was found to seek his arrest. The letters also told them that he was in Amsterdam.

Both Brodie and Smith were found guilty and hanged on 1st October 1788 at the Old Tolbooth on The Royal Mile. Brodie was 47. It’s estimated the crowd that turned up to watch was as big as 40,000. This number is astonishing. The population in Edinburgh in 1751 was thought to be around 49,000, rising to 136,000 by 1831. So in 1788, this could mean that the population was about 90,000 and then half of the city turned up. But hey, there was no Netflix, or Amazon or HBO back then. Hangings of notorious criminals was probably THE big entertainment option!

But wait, there’s more. Just like any good Edinburgh story, Brodie’s death has an urban myth attached to it. After apparent sightings of him in Paris not long after the hanging, a tale began that Brodie, ever the tradesman, had rigged together some type of metal collar, thinking he could save his neck from breaking and secretly escape death. He was said to have bribed the hangman to ignore the metal contraption and others to take him away from the gallows as quickly as possible, hoping he’d be able to be revived by a doctor, also paid off, waiting in the wings.

According to a document written by people who were most likely friends of the well connected Deacon (meaning it’s easy to question its validity), Brodie was announced dead and buried in an unmarked grave at the Buccleuch Church in Chapel Street. His crime was not murder, so his body would not have been given over to the medical schools for dissection in anatomy classes, as was the law then. No other official proof of his death exists. Some believe those connections actually helped him escape and he made it to America.

The Legend in Literature

Robert Louis Stevenson was long fascinated by the story of Brodie’s two lives and the idea of a person having such opposing good and evil sides. And he of course used this as inspiration for one of his most well-known novels, The Strange Case of Dr Jekkyl and Mr Hyde, which was published in 1886. And funnily enough, the author’s father actually owned furniture made by Brodie himself.

The Deacon Brodie Tavern on the corner of The Royal Mile/Lawnmarket and Bank street is a traditional British pub named in honour of the areas best known criminal. The pub itself is owned by a UK chain, so not exactly a must-do, but it’s OK. It has all the usual British pub staples like Fish and Chips, Haggis, Neeps and Tatties and bla, and, not always nooticed  by passers-by, the sign at the front has two sides to it, one portraying the upstanding citizen Brodie and the other, the thief. 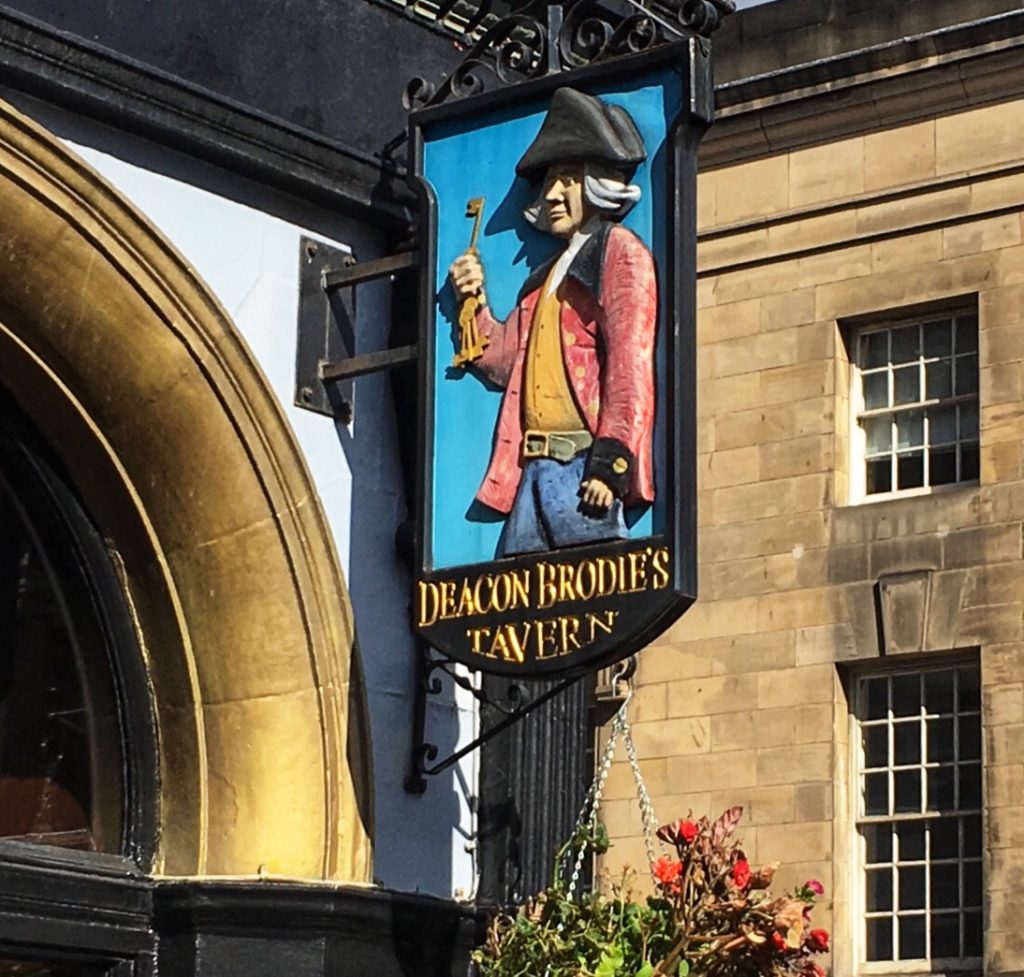 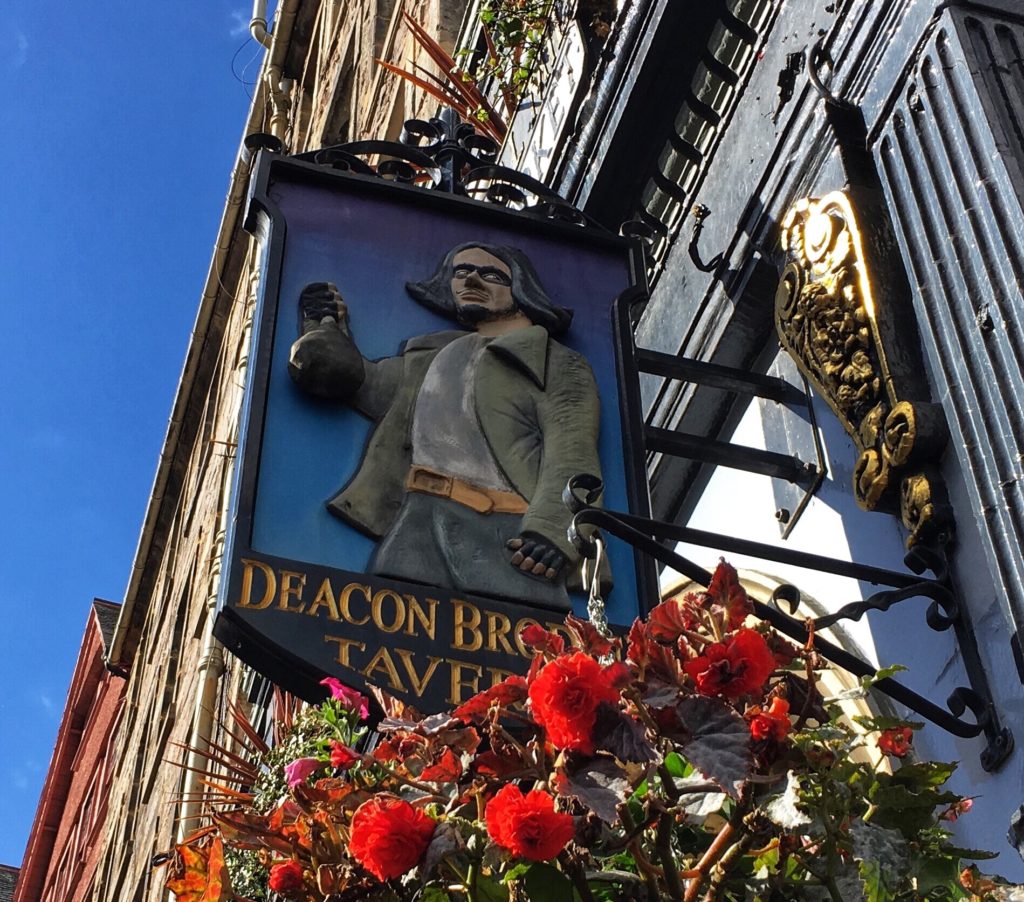 Brodie’s Close is a small alleyway (or close) directly opposite Deacon Brodie’s Tavern and was indeed named after him. It’s down here where his family used to live and work. Today there’s also Deacons House Cafe in Brodie’s Close, where you can get a yourself breakfast, a light lunch or snack down a very typical, atmospheric Edinburgh alley.