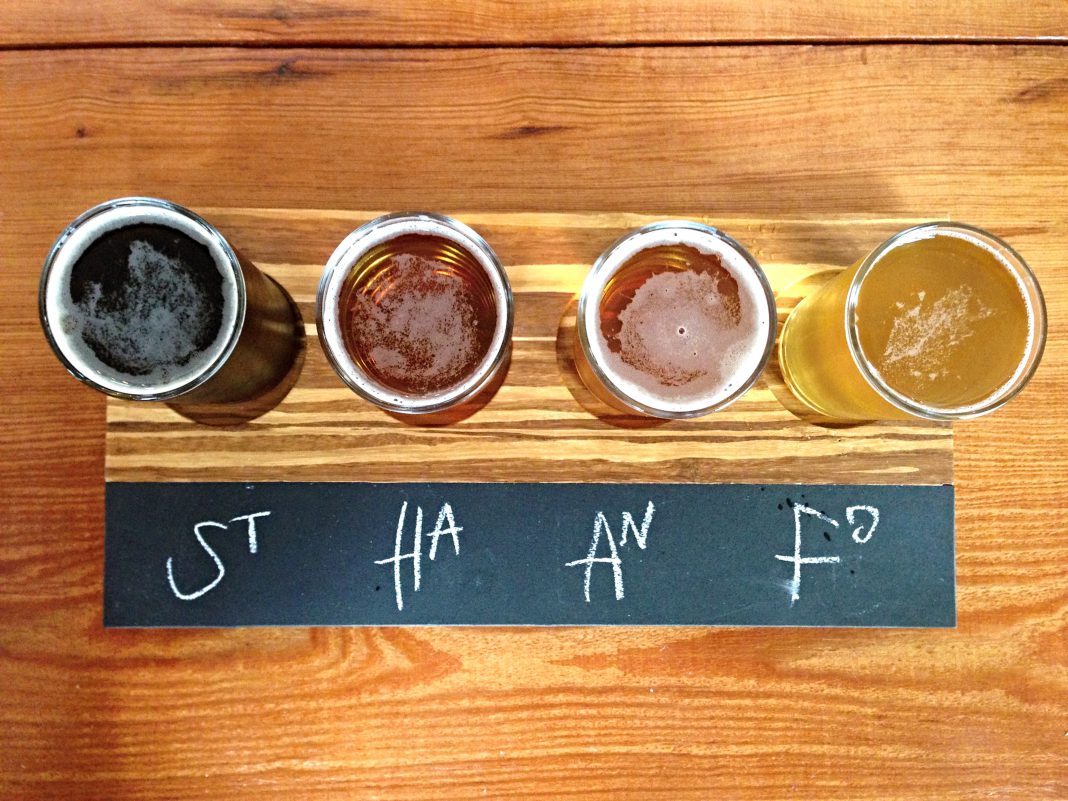 Edinburgh’s beer history goes right back to the 12th century, when monks from Holyrood Abbey discovered an underground lake and began using its pure waters to start brewing. Fast forward 700 hundred years and there were close to forty working breweries in Edinburgh, making it the greatest centre for beer in the UK during the 19th and early 20th centuries, and some say, the world.

Today only one of those remain, The Caledonian Brewery Co, now 150 years old. But in the last few years, micro breweries have become all the rage and Edinburgh’s craft beer industry is flourishing. Here are seven you should keep an eye out for in bars and pubs or even plan a visit to.

Located at Summerhall, a multi-purpose arts centre at the bottom of The Meadows, Barney’s was brought to life in 2010 by owner Andrew Barnett, a graduate of Heriot-Watt University’s brewing and distilling course. In 2012 he moved his micro brewery to Summerhall, itself the site of a brewery for 200 years from 1705. Barney’s has since won no end of awards and their cute little beer van can be found bringing beer to the people at various events throughout the city. Their biggest seller is the Volcano IPA, but there are plenty of limited editions that pop up, including flavour combinations derived from collaborations with other Edinburgh independent food and drink vendors. Tours of the brewery are available too.

Campervan has been around since 2015, when a self taught beer enthusiast kitted up an olive green vintage VW campervan, fully equipped to brew and dispense beer and took it on the road to festivals around Scotland. The summer of 2019 saw the opening of their tap room, located at the Campervan brewery itself, in the middle of an industrial estate in Leith. Simply styled, the tap room is rows of wooden benches and chairs set up around the brewery’s tanks of fermenting beer and is open Thursday, Friday and Saturday afternoon/evenings. It’s super chilled out, family and dog friendly, and if there’s no food truck parked up out the front, you can order pizza from nearby East Pizza in Leith to be delivered to you while you’re there. There also the odd event popping up, with beer and food pairings from Edinburgh’s local independent traders. Popular Campervan beers are Leith Juice, an orange IPA and Mutiny on the Bounty, a roasted coconut flavoured milk stout, but there’s usually about eight varieties to try each weekend.

This award winning family run brewery opened in 2015. They’ve now grown to more than twenty staff, many poached straight from finishing the Heriot-Watt’s Brewing and Distilling degree. All of The Edinburgh Beer Factory’s products are inspired by Edwardo Paolozzi, a Leith born pioneer of pop art and his influence is front and centre not just on the beer names and label and packaging design, but also splashed ostentatiously all over the factory’s façade – just as Paolozzi would have liked it. Tours are available Friday evenings and Saturday afternoons and if cider’s more your thing, they also make a popular local version called Thistly Cross.

Pilot is owned and operated by – guess what? – two guys who met doing their Masters in Brewing at Heriot-Watt Uni. Fancy that. Since starting production in Leith in 2013, they have grown to a four-man-band, doing absolutely everything themselves, including the design of the beer labels. Their core range of unfined (which makes it darker but more intense tasting) Vienna Pale, Blonde and Moccachino Stout is joined by 14 unique special brews like Citrus and Basil Sharp and North Sea Stout. Presently there are no tours and no tap room, but you can find their beers sold at many shops and bars in Edinburgh.

OK, so Stewart’s is located (a mere) six miles out of town in their custom built brewery in Loanhead, but they have uber popular brewery tours, for the locals or those visiting for a couple of months, a cool brew-your-own service and a tap room in Leith. So I’ve included them on this list. Opening in 2004, Stewarts is the oldest, slickest and most successful of the new crop of craft brewers. They have eighteen beers, including my personal favourite ‘First World Problems’ (yes, fine, mostly for the name and artwork) plus a range of limited editions. If you book yourself into their Craft Beer Kitchen to brew up your very own recipe beer, you’ll need to then come back 3-9 weeks later, depending on the fermenting length of the lager or ale you concoct. There’s a tap room at the brewery, but if you can’t get out to Loanhead, remember there’s also the Dockside Tap in Leith that has ten rotating beers to try (at super reasonable prices) and a bottle shop so you can take some of your new favourites home with you. Unsurprisingly, Stewart’s have been victorious at beer awards competitions for quite a few years now, in Scotland, the UK and all over the world.

Again, this is not right in the centre of town, but I felt it was worth mentioning. The baby of the Edinburgh craft brewing scene, The Ferry Brewery opened in South Queensferry in the summer of 2016, the first new brewery in the area since 1851. With a desire to honour the history of South Queensferry, you’ll see plenty of reference to the area’s iconic three bridges (Forth Bridge, Forth Road Bridge and Queensferry Crossing Bridge) in both the names and labels of the beers. The Ferry Brewery has come a long way in just a few years though, with 13 signature beers plus seasonal specials, a tap room and very popular brewery tours also available, with an option to upgrade to include food and merchandise (clever one fellas!).

OK, so this is not a micro brewery, but I thought I should include it here because as I said above, it is the only company still in production from Edinburgh beer boom in the 1800’s. And it’s still a craft beer brewery, since the definition of that can roughly mean a brewery that loves to be creative and constantly experiment with different flavours. Caledonian’s most popular beers are their Deuchers IPA and the newly rebranded Edinburgh Castle (formerly known as 80/). There are also three new beers born out of Wee George, their experimental kitchen – two ales called Coast to Coast and Rare Red and a lager called Three Hop, and of course, it wouldn’t be a craft brewery without a bunch of regular, new, seasonal specials. Caledonian’s story is one of ingenuity and perseverance, having faced closure (saved by a management buy-out), and a couple of near disastrous factory fires in its 150 year history. It may be a big kahuna, but just like most of the companies I’ve mentioned above, it began as the big dream of a single beer loving individual. This one, George Lorimer, just happened to bring his dream to life in 1869.