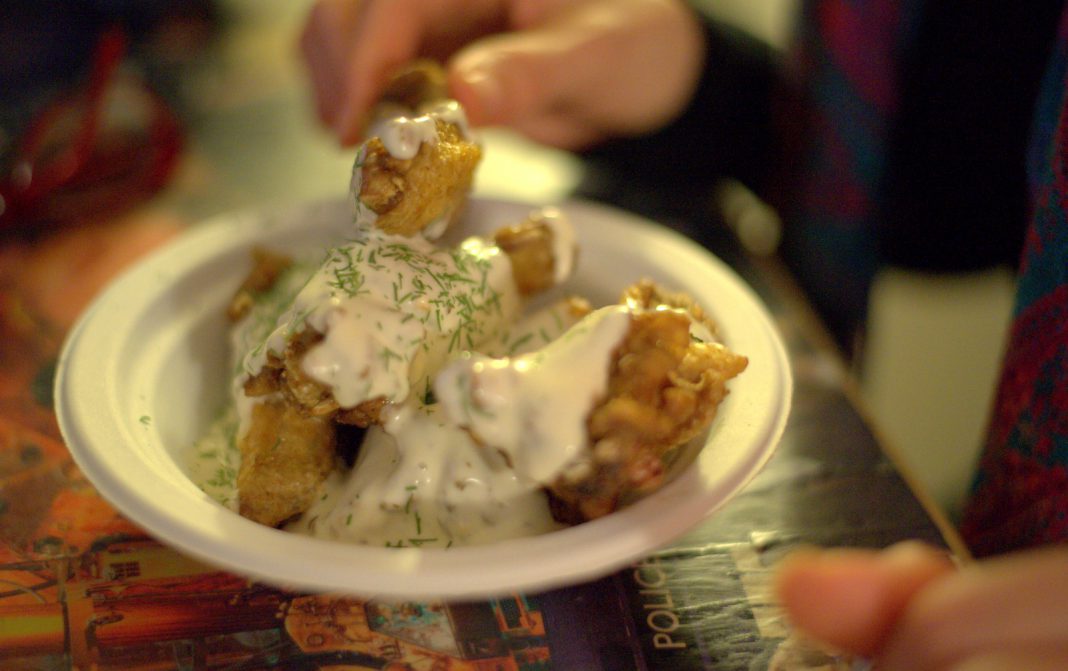 Oh my lordy. So many choices!

I’d read a bit about Wings before visiting, so I knew it was cheap, I knew it was the kind of place that would attract students and party-people (or post-party people with hangovers) and I knew there were plastic plates and tin buckets on the table for your bones. What I didn’t know was dining there would be like checking into an alternate Fawlty Towers universe, where Basil is a twenty-something obsessed with science fiction.

Every inch of Wings is plastered with what looks like a collection that began in childhood and kept going long after most people would agree it’s all become a bit weird. If the decorations are solely from the owner’s collection, perhaps Wings sprang to life only after the memorabilia threatened to take over another room and his wife/girlfriend/family demanded he get rid of it.

So why sci-fi Fawlty Towers? Well that’s all down to our waiter, who of course I’ve named Basil. Here’s the banter that went back and forth between my group and Basil.

Basil (after telling him we’re not ready to order) – Can I get you some drinks then?
Skye – (frantically grabbing the drinks menu which none of us have looked at yet either) Oh, that might be difficult.
Basil- No, it’s not. It’s called reading.

Me – (much later) Can I ask an annoying question?
Basil – You just did.

Just when we were at the point of thinking we should be getting annoyed, Basil turned on the charm. Kind of. He came over unbeckoned to explain, with a hint of pride, that Wings is Edinburgh’s only chicken wing establishment and then let loose their secret – double frying.

The wings were indeed crunchy, but that’s probably because they were double fried to the point of disintegrating any meat which may or may not have existed ‘pre-fry’. What’s left is a bit like eating deep fried chicken skin.

Our choices of sauce were hit and miss. The New Worlder (maple, dill, bacon) was very flavoursome, as was The French Bee (honey garlic) and Oh Canada (Maple BBQ). The Musta-Been The Honey (honey mustard) was drowned in oodles of tasty and super sticky sauce, Zee Buffalo was a bit bland and No Big Dill (dill and Caesar) proved to be the perfect name for it. We thought surely the Paprika wings would be a winner, that they’d be smothered in a Paprika rub of some sort and then fried, but they turned out to be plain fried wings with about half a tin of paprika tipped on them. To be fair, they were listed on the menu under the ‘Dry As You Like’ section.

Wings Edinburgh may seem like a bargain meal, but you’d have to order quite a few servings of chicken wing skin to leave the place full.For the record, after two servings each we all left still hungry, but even with drinks, the bill was only a bit over £10 each.

Afterwards, none of us could figure out what Basil’s deal was. Is he just generally a stroppy guy? Was he upset that he was working when there was a new Dr Who episode on? Or is this all part of a cunning plan to build up notoriety, where Basil’s reputation for having no inner monologue filter (or customer service skills) will grow to such an extent that people will flock to Wings just to see if it’s true?

Well, if that’s your marketing plan guys, here, allow me to help. Basil was a good sport and let me take a picture of him, so you can all go ahead and request him as your server now and help the legend grow.

I know there’s an audience who love this place. And I know lots of people will get a kick out of the sci-fi-geek eclectic decor. In fact, I’m a sci-fi nerd to some extent, so big thumbs up on that from me. But whilst my friends and I had fun and we laughed at Basil’s snark, I can easily see how less easy-going customers might actually take offence.

It’s a good concept, but it all comes down to quality of the wings and I don’t think they are anything to shout about, despite what my photo at the top might lead you to think. I can’t see myself going there again unless I’d been drinking since breakfast and needed a bucket of fried food to keep me going. Silly me, I was expecting a soft coating on my chicken and some grease. I guess that’s what happens when your only point of reference for chicken wings is a lifetime of KFC. Maybe, as Basil explained, this is indeed how they do it in the States, but somehow I doubt it.

Wings is cheap. The decor is cheerful. Basil… not so much.