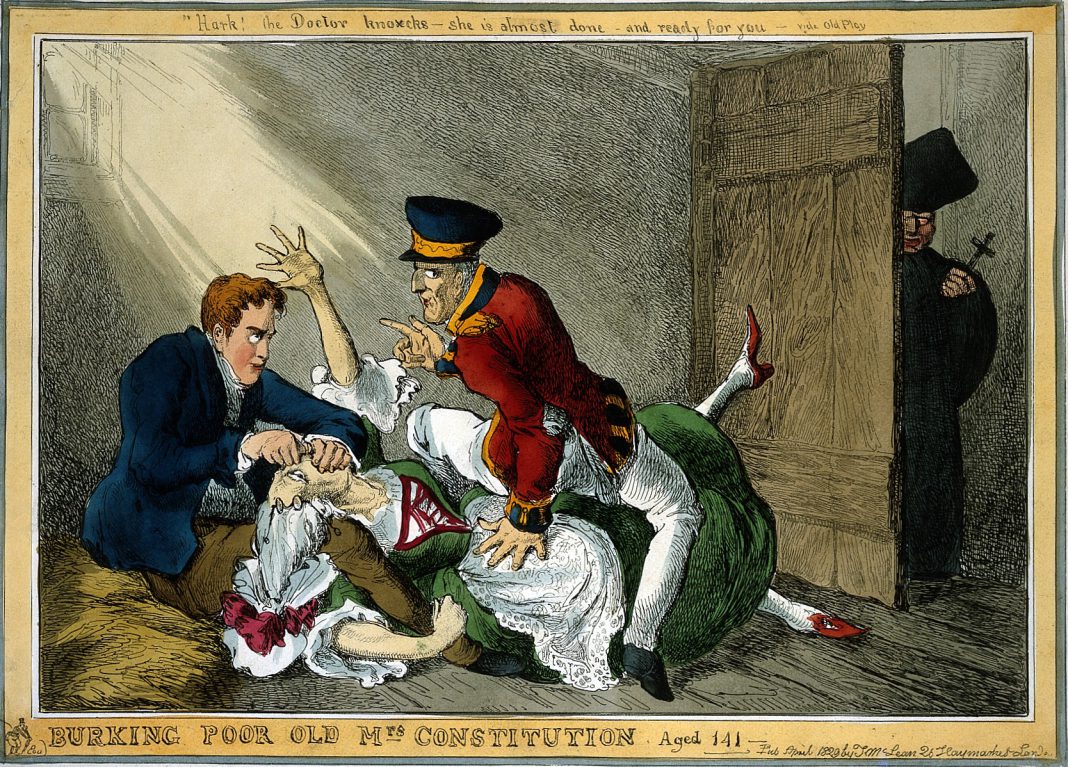 Get yourself along to any historical tour of Edinburgh and you’re bound to hear fantastic tales of some of the city’s less upstanding past residents, including the most notorious of the lot, William Burke and WIlliam Hare. Over a period of roughly ten months in 1828 and 1829, Burke and Hare’s abominable murder spree ensured they would go down in history as Edinburgh’s first, and hopefully last, serial killing entrepreneurs.

What on earth does that mean?

In the 18th and 19th centuries, Edinburgh was one of the world leaders in anatomical research. Medical knowledge was booming and schools were springing up to teach eager medical students all of the rapidly growing discoveries.

As is still the case today, the best way to teach someone about how the body works is to show them on the real thing. The law at the time stated only the bodies of prisoners (dead ones that is) could be used for such study, so Edinburgh found itself with a tricky supply and demand problem. When word went around that schools were willing to pay well for bodies, newly buried cadavers began to disappear from graves. The grave robbers were soon so prolific they were given their own nickname; Resurrection Men. Families of the dead fought back though and began to guard the graves of their loved ones for a few days until the bodies began to rot. This meant they would then be of no use to the medical schools. Ugghh. How sad (and kinda gross) is that? Others built watchtowers and steel cages over the graves so that they couldn’t be disturbed.

Of course, this just made the medical schools more desperate for fresh bodies and they began to offer even more money. And this is where Burke and Hare step in.

Having both emigrated to Scotland from Ireland, Burke and Hare are thought to have met when they were working as labourers on the Union Canal. Hare also ran a lodging house with his wife Margaret in Tanners Close, West Port, a quirk of fate that proved very handy for their soon to be murderous money-making scheme.

It all began in December 1827 when one of Hare’s lodgers died in his room. This one was of natural causes (old age), but he still owed £4 in rent. After moaning about it to Burke, they cooked up a plan to weigh down the coffin with tanning bark and take off with the body to sell to the Edinburgh University medical school. Here they were introduced to Dr Robert Knox, an eminent anatomist and also, it seems, someone who was not too fussed about wondering where these (probably) rough looking labourer types happened to find a fresh body. Knox gave them seven pounds, ten shillings, which is somewhere around £700 in today’s money.

A couple of months later, another lodger was unfortunate enough to get himself a bad cold, and just like any good business men spotting an opportunity, Burke and Hare decided to get him drunk, suffocate him and pay another visit to their mate Knox. I mean, makes sense, a sick lodger back then must have been very bad for business.

I don’t know if it was just a coincidence, or if Knox had given them a future product specification list, but being smothered was in fact the perfect cause of death for the medical schools because it meant the bodies were in excellent condition for study. Burke and Hare developed their own particular method of killing – one of them would put pressure on the chest to stop the victim moving and the other would hold their nose and mouth closed with their hands- that later became the stuff of legend and was also given a nickname; Burking. Lovely. It was also perfect for Burke and Hare as it not only did little damage to the bodies, but also showed no signs of foul play. Well, no signs that could be detected back then. I’m sure CSI’s Grissom would be all over it if it were present day.

Even with all the grave robbing and murdering going on, the medical schools continued to have trouble getting enough dead bodies for their needs. So the price went up and up, peaking at about £12. Is it any wonder then that over the next few months Burke and Hare went a little, shall we say, silly? They began to entice people to the lodging house so they could murder them, and, just as anyone who’s watched or read anything about serial killers would know, they figured out the best victims to choose were the ones who were frail and/or would not be missed. They also started the procedure off by getting them so drunk they probably didn’t even put up much of a fight.

But – classic serial killer error – they got greedy, and this led to mistakes. The first big mistake was to kill a well known local beggar known as Daft Jamie. Jamie was mentally disabled and had a deformed foot and a limp. Students who saw his body, in particular his face and his foot, expressed their suspicions it was Jamie but Knox of course said they were mistaken. Soon after, word went around that Jamie was missing, so Knox chopped off his head and feet before the rest of him was used for his usual packed dissection classes.

Now Knox can claim ignorance all he wants… but hello, geesh. 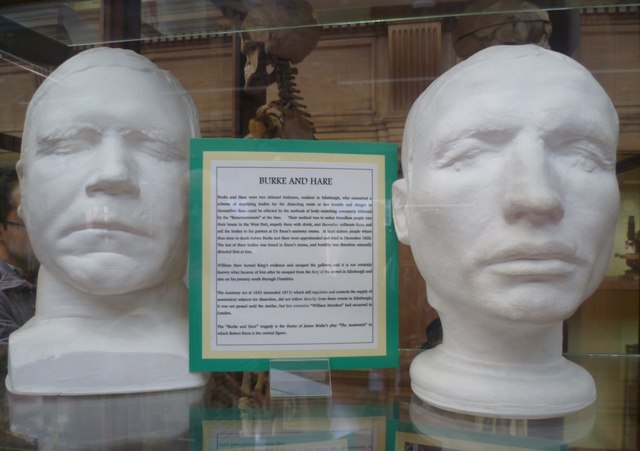 The next mistake was the one that led to Burke and Hare’s arrest. They had asked two lodgers, Ann and James Gray, to stay elsewhere for a night, so they could kill what would be their final victim, Margaret Docherty. When the Grays came back the next day to pick up some clothes they had left behind, Burke and Hare refused to let them into the bedroom to retrieve them. Later that night when they found themselves alone in the house, and with suspicions well and truly aroused, the Grays found Margaret’s body hidden in a pile of straw and went straight off to the Police.

Burke and Hare killed sixteen people in total, three men, twelve women and one child. Police arrested both them and their wives, figuring there was no way the wives could have been oblivious to what was going on and were most likely complicit in it. They couldn’t prove they did the other murders, as any evidence was long gone after the dissections, and a conviction was slow in coming because Burke and Hare simply blamed each other. Eventually they offered Hare and his wife immunity if Hare admitted his and Burke’s guilt. Which he did. In great detail.

With little evidence to go on, Burke was found guilty of only one murder, but that was enough to sentence him to death. His wife was released. Fittingly, as was still the practice for dead criminals, Burke was hanged and his corpse sent off to be dissected at the Edinburgh University medical school. His hanging drew a huge crowd, with people living in nearby tenements even making a profit by charging people to watch it all from their flat windows.

Hare was run out of town and told to head for England. Nobody knows for sure what happened to him but stories say he was thrown into a lime quarry and spent the rest of his life in London as a blind beggar. The wives, verbally abused by people in the streets, fled Edinburgh too and little is known of what happened to them as well. Although never charged, mostly because Hare said he didn’t know anything (wonder how much he was paid to say that!!), Knox’s reputation was in ruins, so he too ran off to London and struggled for years to find employment.

Burke’s body was dissected by Professor Alexander Monro, the third and least revered of the three generations of Alexander Monro’s who were anatomists at Edinburgh University. This Monro later wrote a letter stating that the ‘ink’ he used for it was actually Burke’s blood and that he had taken it from his head.

Students who attended the dissection took pieces of Burke’s skin as souvenirs, some of them then making it into pocket books. One of them is today on display at Edinburgh’s Surgeon’s Hall Museum.

Their murders brought to light the medical schools’ continued need for bodies, so The Anatomy Act was passed in 1832 to try to stop any more copycat crimes. This new act meant that bodies which remained unclaimed after 48 hours could be given to science. The practice of giving criminals’ bodies over for study was stopped.

West Port, where the bulk of the murders took place, is today the location of Edinburgh’s Pubic Triangle, a traffic intersection shaped how you’d imagine and ringed with three strip clubs, one of which is named after Burke and Hare. Classy. It also has a couple of great cake shops, Lovecrumbs and Tasty Buns. Not that that means anything, just thought you might want to know.