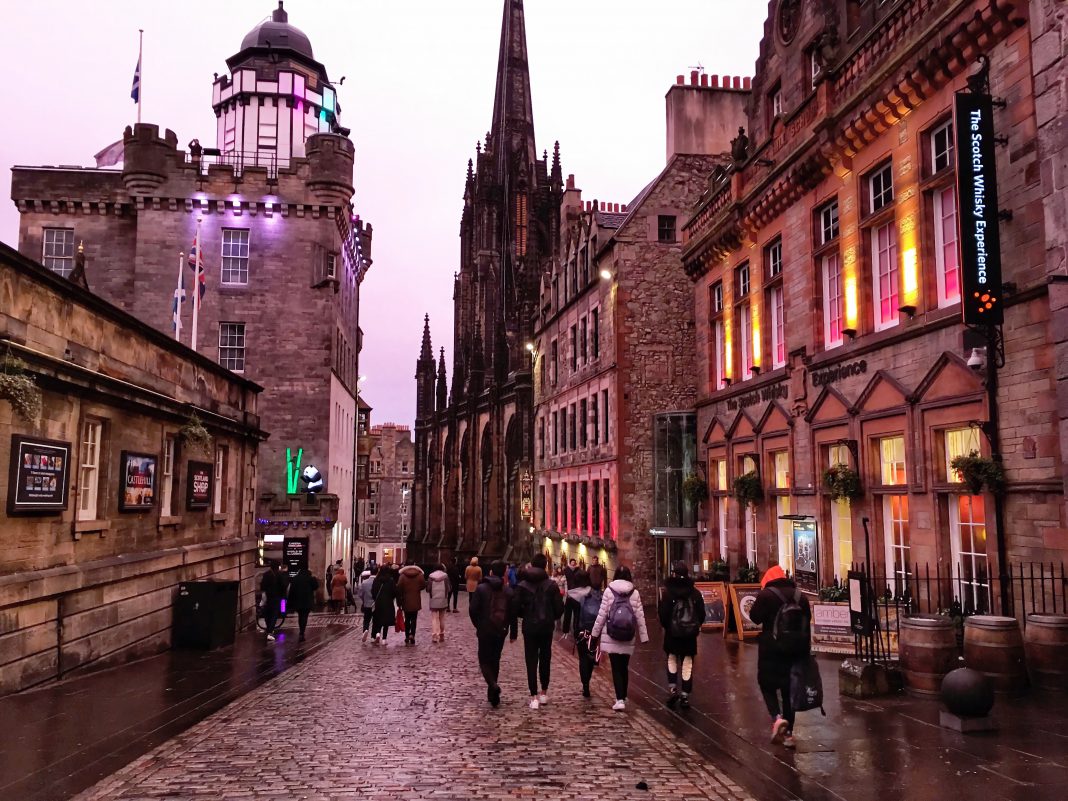 Is it just me or do you too find yourself a ‘victim’ of increasingly out of control holiday gift buying obligations? Never mind the time, money and carry on space that eats up, are you also then greeted with a less than appreciative gift receiver on the other end? Well, if you’re coming to Edinburgh, I have two ways you can solve this conundrum; stop talking to all your friends and relatives a couple months before you leave or, perhaps the slightly easier option, have a read of this post. Not only does this tell you the best places to get a gift in Edinburgh, but it will also point you in the right direction to come home with a quality, funky, tasty or, quite possibly, one of a kind souvenir all for yourself.

Curiously, for the town that is the birthplace of all things Potter, Edinburgh has only recently seen the arrival of dedicated Harry Potter shops.

Formerly Diagon House, but now called Museum Context, this shop on Victoria Street (believed to be the street that was JK Rowling’s inspiration for Diagon Alley) has two floors crammed full of Harry Potter inspired ‘curated’ merchandise, as well as some actual, real, proper, officially licensed products. Ooooh. The curated bit means a visit to Museum Context is a more immersive one, but a lot of items in here are quite pricey as a result too. Potter fans with smaller budgets will manage to find something too, but might be left with quite a long Christmas wish list.

The Boy Wizard has two locations in Edinburgh, one exclusively Harry shop on Victoria Street and another – called Galaxy/Wizarding World – on Nicholson Street that has both Harry and Star Wars memorabilia. Both of these shops have oodles of Potter merch, but (as far as I know) none of it is official. It would still thrill fans though I’m sure, to say that they bought their unofficial Harry Potter wand or mug or soft toy from a Harry Potter shop in the city where Harry Potter was first conjured up.

The Royal Mile is full of identikit souvenir shops crammed with cheap, tacky and (probably) made in China gifts. But at Cranachan and Crowdie everything is guaranteed to be made in Scotland. They’ve got high quality souvenir homewares, handmade wooden items from local artisans and gourmet food and drink that’s perfect for packing up into a picnic hamper (which they can make up for you) or just a very luxurious nibble session. It’s also run by a team of friendly, enthusiastic and knowledgeable staff who are so genuine it’ll remind you what customer service is supposed to be like. To top it all off there’s also guest appearances by Caley the Labradoodle.

I used to walk past this shop, and apart from thinking “Aww, cute name”, a cursory glance in the window had me dismissing it as a run of the mill ‘dust collector’ type of place. But oh no, it’s not that at all. The Cat’s Miaou is a treasure trove (a bit of digging is indeed needed in certain corners) of original, designer and ethically made high quality trinkets, jewellery, baby-clothes, scarves, hates, gloves, cards, bags, cushions and… oh I think I’ll stop there. Don’t be all Judge Judy like me, just go in and start hunting.

Dead Head has been running for more than 25 years and is rumoured to be the inspiration for the hugely popular British comedy Black Books, about a stroppy, misanthrope London bookshop owner. If that’s true, maybe it will give you a clue about what you’re likely to find there. But whatever the levels of service, comics fans will have an absolute field day here. If you’ve got a comics lover on your gift buying list, you’ll be able to impress them by picking up comics and graphic novels by independent local Edinburgh and Scottish artists.

You might find something you like for yourself in their Victoria Street clothing boutique, but for gifts, head to Swish’s Cockburn Street outlet to pick up some of their printed t-shirts. Choose from cool, funky or, depending on your sense of humour, silly designs, or bring in your own ideas to have one made up in store for you.

The Fudge House has been operating on The Royal Mile since 1949. They are still today very much a family business, making all their fudge by hand using their original secret family recipe. Fudge is quite common in Scotland, but was actually invented in the US. There is however a Scottish version of fudge, called Tablet, which, instead of butter, sugar and milk, is made of butter, sugar and condensed milk – trust the Scots to go just that one step further when it comes to indulgent food – and you can try some tablet here too. Prepare yourself, with flavours like lemon meringue pie, pistachio and white chocolate and praline and Drambuie, this is top quality, gourmet fudge. Mmm mmm.

Got a friend or relative who really knows their whisky? Slightly hard to please, perhaps? Well, this’ll impress em. Head to Cadenhead’s, Edinburgh’s oldest independent bottler, to find them a bottle of Scotch that’s sure to be unique.

Now here’s an original gift/souvenir. Yep, Mr Wood sell fossils. Or he did, until he died in 2012. But the shop lives on. Mr Wood was an internationally renowned fossil hunter with a physical shop on The Grassmarket which opened in 1987, and a thriving online business that followed. So if you’ve got one of those really fussy, hard to buy for friends or relatives, get them a dinosaur fossil. Or a meteorite. Or amethyst, malachite or garnet. Or maybe pick up something that’s been made into jewellery, like a shark tooth necklace. That’ll shut those fusspots right up.

Local designer Joey D makes upcycled handbags, jackets, kilts and more (much more than I could list here), from scraps of tweed and leather and army disposals. These are truly one offs and are priced accordingly, so maybe save this place for yourself. Downstairs there’s similarly upcycled armchairs, but that’s only if you’re a supremely generous gift giver.

Now with its own swanky new headquarters by the Union Canal, Edinburgh Printmakers is a working printing studio that supports local artists by giving them space, tuition and opportunities to show their work. And for us, they have a gift shop with limited edition prints, jewellery and books for sale. If you think you might like a print, just a word to the wise – this is serious stuff, bring your cheque book.

With a mission to bring kilts into the future and onto the fashion pages, 21st Century Kilts have kilts made from leather, denim and camouflage, as well as the more traditional tartan wool, of course. Some of their famous fans include Lenny Kravitz and Vin Diesel and, because these kilts are not just for men, Princess Charlene of Monaco.

A lot of these kinds of shops in Edinburgh close for a month or so around Christmas and New Year, so make sure to check their websites for opening times if you’ll be here then.

The Best Pizza in Edinburgh

The Best Places to Try Haggis in Edinburgh