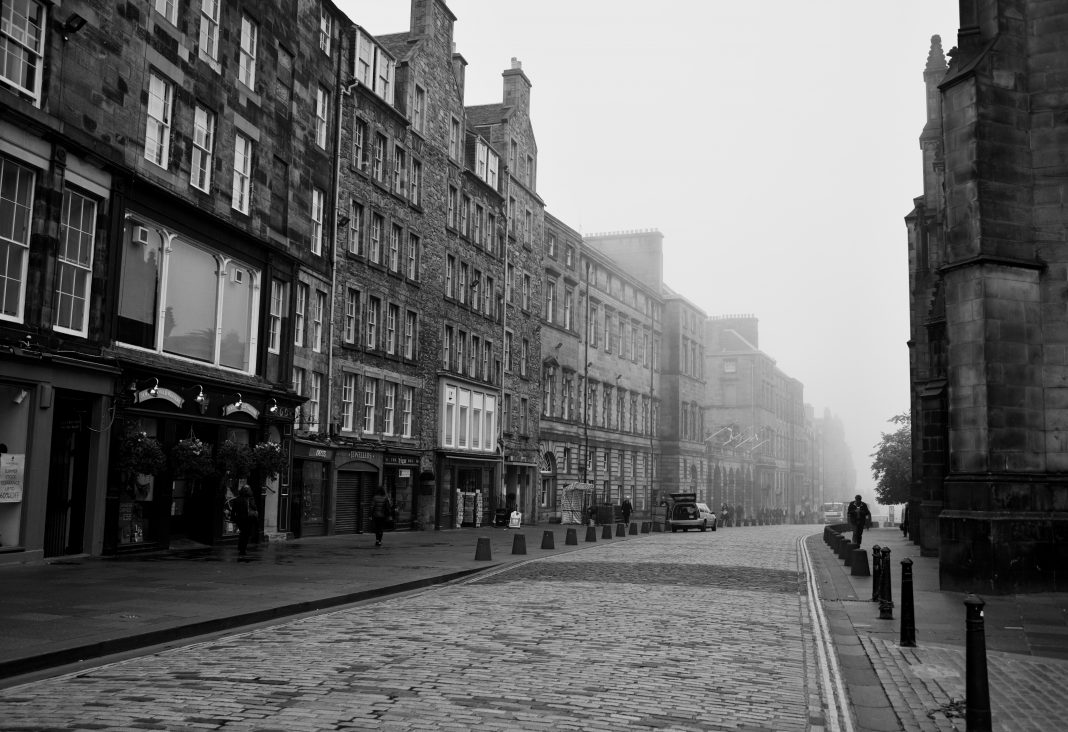 The Royal Mile in Edinburgh is the most iconic street in Scotland. If it wasn’t for the popularity of Monopoly, you could probably even say it is the most famous street in the whole of the UK. For hundreds of years, the entire city existed purely along its length, which is, if you’re being pedantic, actually a smidge over a mile long – 107 yards longer to be exact. And for all of us who have no idea how long a mile or a yard is, that’s about 1.7 kilometres. But let’s stick with tradition, I mean, The Royal 1.7k just doesn’t slip off the tongue all that well does it?

Just about every significant event in Edinburgh’s history has happened in and around the Royal Mile, starting millions of years ago with the formation of a volcanic plug, which is the big chunk of rock Edinburgh Castle now sits on. The Royal Mile is actually built up along the tail of volcanic debris that spilled out from the volcano and ran down the hill for about… hmm… one mile and 107 yards. For centuries, all the city’s inhabitants lived either on it or in the many cramped closes running  either side of it. With a castle at one end, a palace at the other, it has seen battles won and lost, given refuge to a fleeing Mary Queen of Scots, it is the home of the Church of Scotland, was the playground of the famous murderers Burke and Hare and of course is today where the biggest festival in the world hosts The Edinburgh Fringe and the The Royal Edinburgh Military Tattoo.

Today it might be flooded with tacky tourist shops, but that is in no way a reason to stay away. Look beyond all the tartan tatt and you’ll see there’s enough history packed into this one mile to fill quite a few books. And much as I’d love to lock myself into a room for a few years to write it all down for you, I think just a few fun facts to clue you up before you visit will do.

The Royal Mile is what people refer to the street as a whole, but just to confuse all the city’s posties, it is actually broken down into other names every couple of blocks. The castle sits on Castle Hill, with Castle Esplanade being the big open area before the its gate. From here down to the former Highland Tolbooth St John’s Church (now an events space and cafe called The Hub) it is Castle Hill. Then we have Lawnmarket, until the intersection of George IV bridge where it becomes the High Street. It remains the High Street all the way down to St Mary’s street, helpfully marked by a pub called The World’s End, named so because this was where the limits of the city proper used to finish. From there it is called Cannongate, all the way to the roundabout outside the new Parliament building. And finally, there’s Abbey Strand, a small path leading to the gates of the Palace of Holyroodhouse.

At the beginning of Castle Hill, on the side of what is now the Tartan Weaving Mill, if you look carefully you’ll see The Witches’ Well. This is a statue commissioned by one of Edinburgh’s coolest 19th century thinkers, Patrick Geddes, to commemorate all of the women burnt to death and hanged in the city on this spot after being accused of being a witch during the 16th and 17th centuries.

The Origin of the Loo… maybe

By the mid 1600’s, up to about 70,000 lived on or around Edinburgh’s Royal Mile. With the need to house all these people, floors were simply built on top of other floors, so that eventually some buildings ended up being ten storeys high. On the one hand this was a bit of a coup, as they’d inadvertently managed to design the world’s first tenement blocks. But on the other, it brought with it a whole new problem. Back then there was no plumbing, so people on the upper floors used to simply throw their sewage in buckets out the window. Lovely. I mean, come on guys, you’ve figured out how to build a solid structure ten storeys high, surely someone could have thought to stick a pipe on the side of it to throw the sewage down nice and neat-like? They did at least least shout out a warning to people below though, which was “gardy loo” thought to be a bastardisation of the french ‘garde a l’eau’, meaning ‘watch out for the water’. And this is quite possibly why Brits call the toilet the loo. But don’t quote me on that. I could be talking nonsense. There was also no street cleaning service at the time, so let’s just imagine the whiff for a moment. Also, did they have wellies back then? OK, moving on…

The Origin of Jekyll and Hyde

Deacon Brodie’s pub, on the intersection of Bank Street and George IV Bridge, is named after yet another of Edinburgh’s famous criminals. William Brodie was a top cabinetmaker and president, or Deacon, of the Association of Wrights (a wright being someone who worked with wood). He was also a master locksmith who worked in some of the most prestigious houses in the city, and it seems the level of trust, the access he got and the insider knowledge of each house’s security was just too much of a temptation. Brodie’s career in theft began in 1768 and went on until he was caught in 1788, along with three apprentices he had picked up in 1786. He was hanged in front of a crowd of tens of thousands in October 1788. A century later the story of this man, a respectable tradesman by day yet prolific thief by night, became the inspiration for Robert Louis Stevenson’s tale Jekyll and Hyde. If you look at the sign hanging out the front of the pub, you’ll see a separate image of the two sides of Brodie’s personality depicted on each side.

Intrigued yet? Excited to go check it all out yourself? Well, as a little companion to this post, I have written another post about The Royal Mile today and what is good to see and do there, and what to consider skipping. Give that a read too and you’re all set.